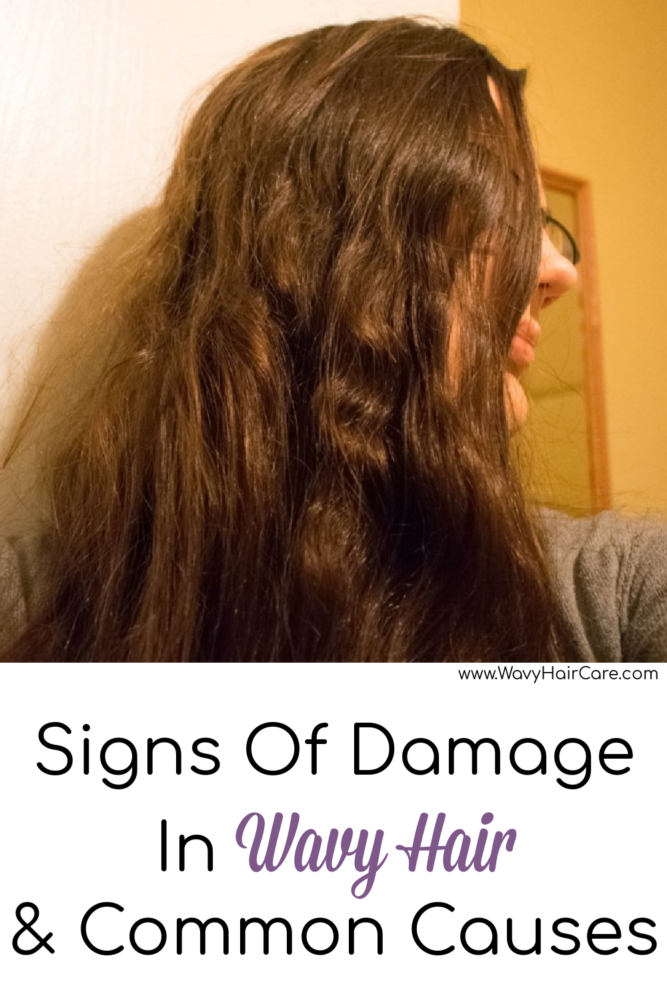 Signs That Your Wavy Hair Is Damaged

Split ends. These are a giveaway that your hair is definitely damaged. It’s best to have them trimmed because while splits will start at the ends, if left untreated they can continue to split up the hair shaft.

Unexplained texture change. Texture can change due to hormonal changes so if you’ve gone through puberty, pregnancy, or changes in hormonal medications that could be the cause. Keep in mind that hair grows about half a inch per month, or six inches per year. So it may be several months or even a year after a hormonal change before you may really notice the change. If you have seen a texture change with no clear cause, it could be damage.

Your hair feels dry compared to your norm.

Tangles. Tangles are normal for many hair types, but if your hair has become much more tangly this can be due to damage.

Breakage. If you see lots of broken pieces of hair happening, that’s a sign that your hair is likely weak due to damage.

Lots of frizz. All wavy hair has some frizz, some more than others. In general, there are many, many causes of frizz and most aren’t a sign of damage. But if yours has gotten really frizzy vs your usual that can be damage.

Your hair is rough feeling. Some hair types are naturally less soft than others. For example, really thick hair strands are often rougher feeling than fine hair strands. So this is another one that you should base on your norm.

High porosity hair is usually a sign of damage. Gets soaked easily but dries fast too. Feels rough after your hair dries unless you use leave in.

Your hair looks matte or dull rather than shiny. Hair type can make a difference in natural shine, but if your hair used to be shinier and has gotten more dull, that’s likely damage.

Longer hair is always going to be a little damaged because even gentle grooming and ordinary living life in the world causes some damage to hair. So the longer you grow your hair, the older your hair ends are, and the more time they’ve had to get damaged by life. Here is a quote about ‘natural’ (non-chemical or hair dye-related) damage in hair.

“Cuticle damage evidenced by broken scale edges can usually be observed a few centimeters away from the scalp. Such damage is caused by weathering and mechanical damage from the effects of normal grooming actions, such as combing, brushing and shampooing. In many long hair fibers (25 cm or longer), progressive surface damage may be observed (illustrated by Fig. 1.23). Stage 1 shows intact smooth scale edges and scale surfaces; stage 2 contains broken scale edges; in stage 3, the scales have been partially removed, and in stage 4 the hair splits indicating extensive cortical damage. ” quote is from Chemical and Physical Behavior of Human Hair by Clarence R. Robbins.

Causes Of Damage In Wavy Hair

Bleaching especially if going from really dark to really light, though even light bleaching is known to do real damage to hair both at the cuticle and inside. Bleaching your hair multiple times is also known to be significantly worse than hair that has only ever been bleached once. (Source 1 and Source 2)

Hair coloring (Dyeing your hair darker than your natural hair color) is damaging but less than bleaching.

“With regard to the changes most relevant to shampoos and hair conditioners, these reactions of permanent waving, convert the virgin hair surface from a hydrophobic, entity with little surface charge to a more hydrophilic, more polar and more negatively charged surface. More of the lower oxidation state sulfur compounds are formed in permanent waved hair and exist after waving as compared to chemically bleached hair or sunlight oxidized hair. These surface and curvature changes produce higher rubbing forces resulting in more cuticle protein and lipid removal by hair grooming actions.”

This quote is from Chemical and Physical Behavior of Human Hair by Clarence R. Robbins. It’s explaining that after having your hair permanently waved (what most of us would just call ‘permed’) hair is more likely to be damaged by regular grooming actions like brushing or combing, even when compared to other types of damaged hair like bleached hair or sun-damaged hair. So it’s not just that perms themselves do damage, but hair is more prone to additional damage afterward. 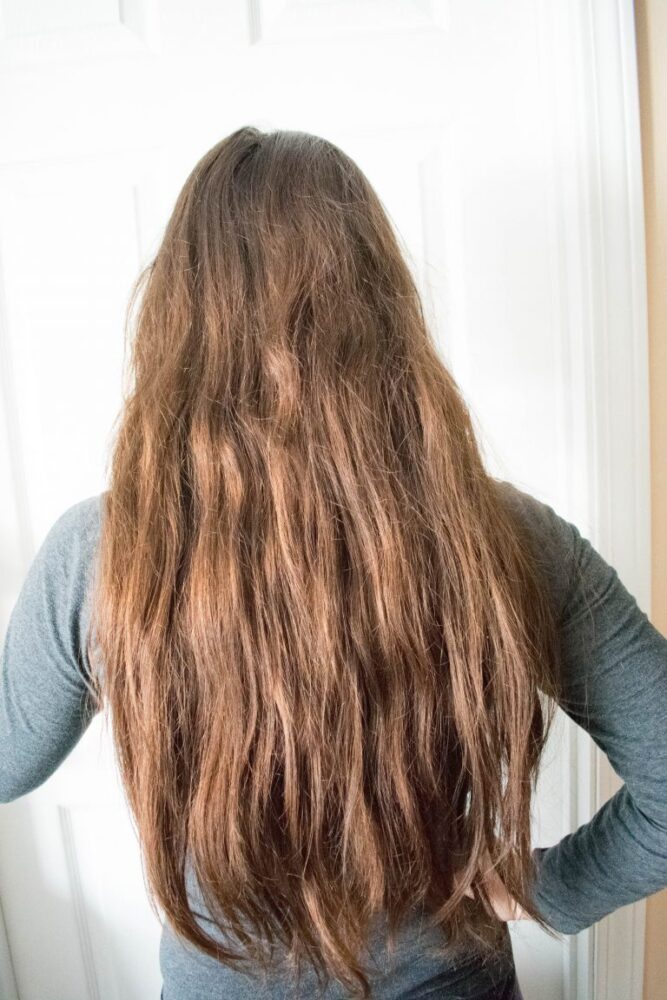 My hair about 6 years ago – it’s much healthier now!

Using blow dryers. Blow dryers are less damaging than curling irons or flat irons because they don’t physically make contact your hair, but can still cause some damage especially used on high heat.

Swimming in pools. Chlorine and other water treatment products can damage the hair.

UV damage from sun exposure. This is especially true for people who are naturally blonde or have light hair colors. This is also true for gray/white hair. Here’s a quote on how dark hair is better protected from sun damage.

“The proteins of the cuticle are degraded by UV-B and UV-A, but less by visible light and that cystine, proline and valine are degraded more in light brown hair than in black hair. In other words the photo-protective effect of melanin is much better in dark hair than in light hair.”

And one on how light hair’s cystine (a naturally occurring protein in hair) is damaged more, and after being damaged, the hair is more prone to breaking with tensile stress. Tensile stress refers to physical strain so this could be things like brushing or combing the hair, or even pulling your hair back or moving your hair around when styling it.

Quotes are both from Chemical and Physical Behavior of Human Hair by Clarence R. Robbins.

Physical damage from brushing your hair, using hair ties, hair clips or other hair accessories. Even friction caused by wearing a hat, hair catching on your collar or hood, or towel drying hair. While these types of physical actions do some damage to all hair, they do more damage to hair that is already weaked by other major forms of damage (bleaching, dyeing, perms, etc).

Hard water buildup. If you have hard water in your shower and don’t use a chelating shampoo, you can get a build-up of mineral particles in your hair. This can build up to the point of limiting how much water can get into your hair, and make it dry which can damage it. If you have hard water, try using a chelating shampoo about once a month to remove any buildup and avoid this type of damage.

High PH. The reason why bleach and other treatments are damaging to the hair is primarily due to their PH level. When our hair is exposed to produce with a high PH level, it raises our hair cuticle and causes damage. 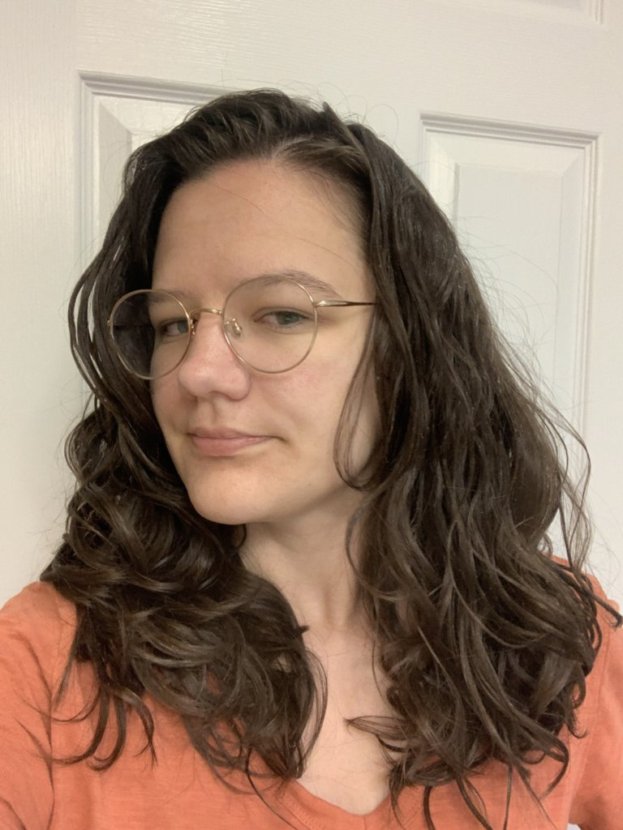 Is My Hair Wavy Or Just Damaged?

Sometimes people find that their hair is damaged and has become wavy, so they start to wonder if their hair has really changed textures, or if it just looks wavy because it is damaged.

Most people find that if they have textured hair and damage it, it will get straighter, not curlier. Also, lots of people with straight hair will damage their hair but that doesn’t usually make it look wavy. So if you previously thought your hair was straight and now it’s damaged and wavy…it’s probably become wavy due to age or hormone changes.

However, I have seen some people say that their hair does curl up tighter after it’s been damaged. So, perhaps it is possible to have hair that is usually straight but will act wavy if damaged? I think the only way to know for sure would be to treat your hair gently and let it grow out and see if it goes back to being straight or if it stays wavy.

Can You Fix Damaged Hair?

Many people believe that using protein products or protein treatments help fix damaged hair. It’s true that damaged hair has experienced a loss of protein, and may look and feel better when using more protein in your haircare routine. However, when hair is damaged it’s the disulfide bonds that are broken and protein doesn’t repair the bonds.

There are products that can rebuild broken bonds, though. These include products like Olaplex, Curlsmith Bond Curl Rehab Salve and K18.