Yet, I’ve still been asked all sorts of other questions about diffusing! I realized I had even more to share with you guys about diffusing. I decided that I’d basically just do a Q and A style blog post covering different diffusing related questions that I’ve received. 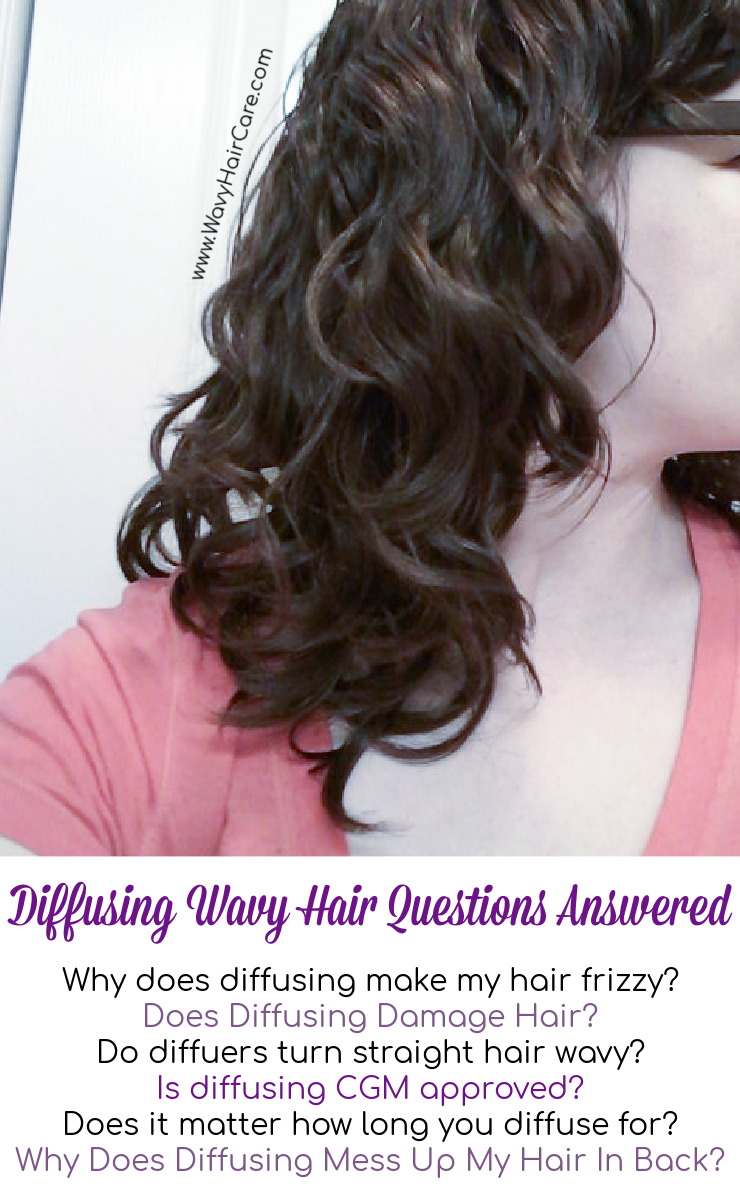 Diffusers don’t have the ability to change your hair texture in any meaningful way. Diffusers are just attachments that take the air that comes out of your blow dryer and spreads it (diffuses it) across a wider area.

There are different techniques used for diffusing, but some of them, like pixie diffusing, involve putting your hair in the diffuser. This basically just helps hold/support your hair as it dries. It doesn’t change your hair texture.

The main reason why people ask this one, is they notice that their hair is wavier or curlier when they diffuse vs when they air dry. This is a common experience, but it’s not the result of the diffuser making your hair curly. If your hair dries wavy when you diffuse, that’s because your hair texture when wet was already wavy, and the diffuser just helps dry your hair faster, so it doesn’t get straightened out by the weight of water being in your hair longer.

In other words, diffusing your hair dry may help hold your hair in the texture it has while wet, but it doesn’t create that pattern out of thin air. That’s your texture, it’s just being preserved better by drying your hair faster than air drying.

If you’re worried that your hair isn’t “really” wavy, you may benefit from checking out my post ‘Does the curly girl method turn straight hair wavy?”

Wavy Hair Before And After Diffusing 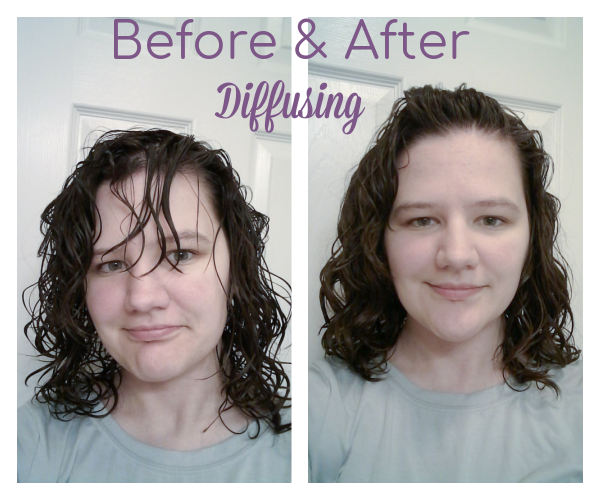 I also pinned my bangs back and scrunched out the crunch.

No idea what ‘scrunching out the crunch’ means? Check out my post what is a hair gel cast & why you want one.

Do Diffusers Cause Heat Damage To Wavy Hair?

Diffusers are unlikely to cause heat damage to your hair. Some damage may be possible if you use high heat and touch the diffuser directly to your hair, but diffusing is widely seen as far less damaging than blow-drying, using curling irons or blow dryers.

I wish I knew the exact video to link to, but I can’t seem to find it. I know that I’ve seen hair stylist and curly hair specialist Manes By Mell suggests only using the high heat setting while diffusing if you are not touching the diffuser to your hair. She likes to recommend hover diffusing, and she says using high heat is safe in that case. If the diffuser isn’t directly contacting your hair, the heat won’t transfer as much as it can if they are in direct contact.

Can You Use A Diffuser While Following The Curly Girl Method? 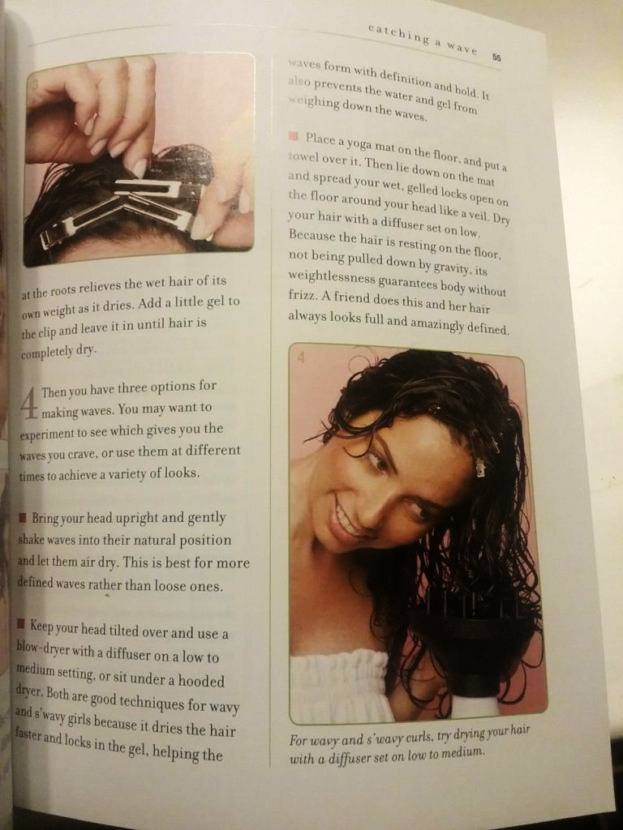 For some reason, it’s often repeated online that the true curly girl method doesn’t allow people to use diffusers. This isn’t actually true. The true curly girl method is based on Lorraine Massey’s book and she recommends that “swavy” and wavy haired people diffuse! The book is very against using heat, she even says that a single use of heat tools like a blow dryer or a flat iron can cause permanent damage to hair…yet she recommends diffusing. So, I think that speaks somewhat to how it is quite safe.

Does It Matter How Long You Diffuse Your Hair?

A lot of wavy hair routines will say something like ‘Diffuse until 90% dry’ or similar.

If your hair is like mine and takes a long time to dry, you’ve probably wondered if it matters if you diffuse all the way, part way, or just a little bit!

It does make a difference in results, at least somewhat. The main reason why people recommend diffusing to 90 or 95% dry instead of until completely dry is diffusing until your hair is totally dry usually introduces a lot of frizz vs diffusing until very close to dry. That’s just one example of how it matters how long you diffuse, though.

After I got a haircut a couple months ago, I had to learn some new techniques as my old techniques didn’t look very good on my new haircut. The biggest change I made was how long I diffuse for. I used to diffuse until almost dry, to maximize volume and the tightness of my waves. Now, I only diffuse for a little while so that my hair isn’t as tight, so that the sides don’t “poof up” too short.

As a result of this, I decided to run an experiment for you guys to help show how diffusing time does matter. I Didn’t want to diffuse my hair until it was fully dry, as I knew that would result in my hair being too short. So I experimented with diffusing just a little bit (six minutes total) with diffusing until about half dry (30 minutes of diffusing). To try to exclusively look at the impact of diffusing time, I used the same shampoo and conditioner products, tried to use the same amount of each, used the same techniques in the shower and after the shower, used the same gel, in the same amount, and applied it the same way. My goal was to use all the same techniques on both of these wash days except for the diffusing time.  The top row of the collage below is the day I diffused for  6 minutes. The bottom row is photos from the day that I diffused for 30 minutes. If I would have thought this out better, I wouldn’t have worn two pink v-neck shirts on each day! Oops. I didn’t wear the same shirt on both days they are just somewhat similar but I realize wearing a significantly different shirt would have made it clearer which photos are from which day. 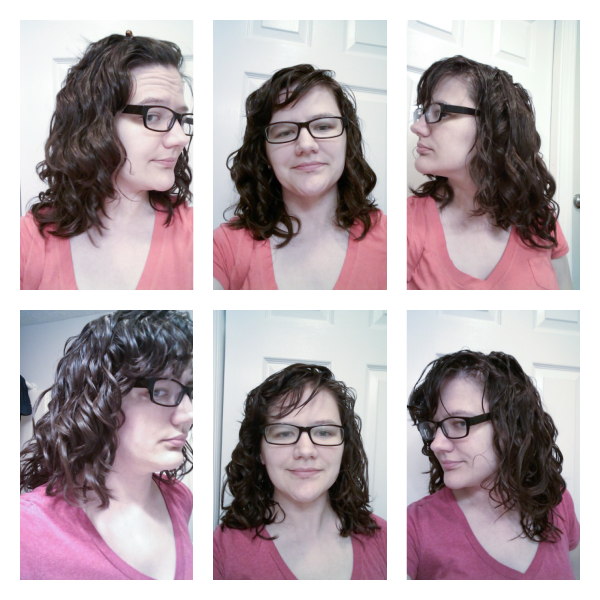 A slightly unexpected difference was that the day where I diffused less, I actually had slightly more volume. I think this is because my curls were looser, so they were a bit puffier. I know that in the past when I have diffused until almost completely dry it resulted in more volume due to the increased shrinkage. In fact, this impact is what I try to avoid by diffusing less now than I used to. See the photo below for an example of how diffusing until fully dry makes my current haircut get REALLY voluminous, haha. 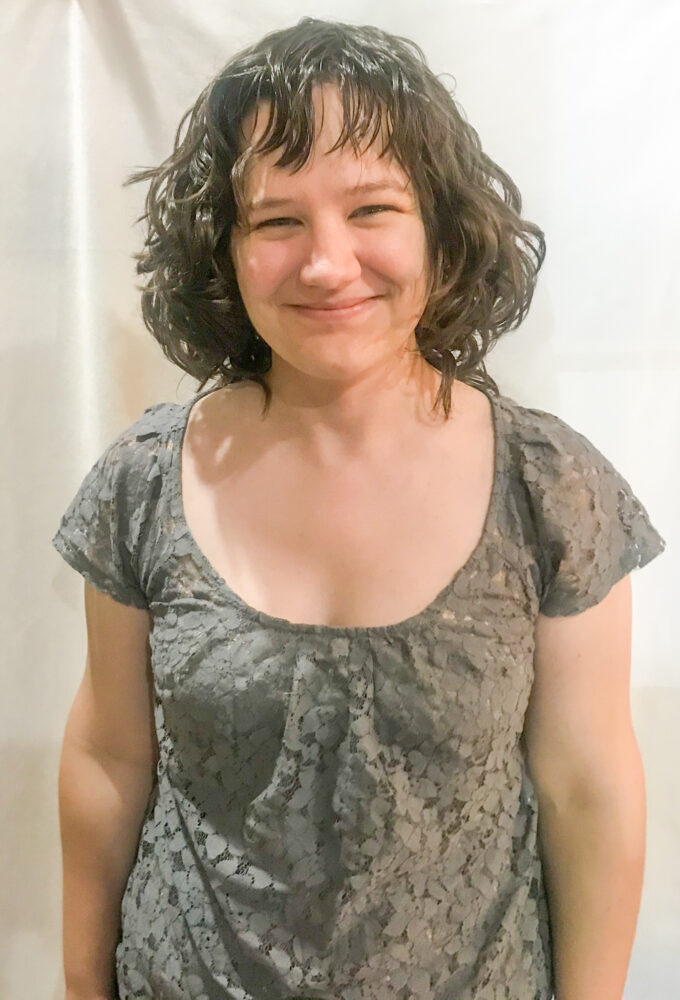 To learn more about my haircut experience check out these posts:

My experience getting a Devacut on wavy hair

Short hair (or haircut with short layers) routine for naturally wavy hair (to learn how I have adapted to styling this haircut!)

If I’m Going To Diffuse And Air Dry, Which Should I Do First?

I haven’t actually been asked this one, to be honest. However, I have often see people say something like ‘I let my hair air dry half way, then diffuse the rest’

Most likely, if you’re going to do a combination of air drying and diffusing, you’ll want to diffuse first. This is with the assumption that your reason for diffusing is to reduce your overall drying time.

Diffusing even 5 minutes shortly after washing your hair can significantly reduce how long your hair will take to finish air drying, by reducing how much water is in your hair from the get-go. If you air dry and then diffuse it can still save you some time, but less.

If your reason for diffusing is more about your technique, then whether you air dry or diffuse first should depend on your style goal.

Keep in mind that with all of these, they’re based on your curl range. What ‘looser waves’ or ‘tighter waves’ will be for you depeds on your curl pattern. For example, if you have 2C hair then using techniques to get ‘looser waves’ may put you more at a 2B, where if someone who regularly has 2B hair uses a technique to get ‘looser waves’ they’ll get more of a 2A. I hope that makes sense? I don’t mean to suggest that these techniques will give anyone/everyone tight waves or loose waves. As this post said earlier, diffusing doesn’t create waves. I just mean looser or tighter than your norm.

If you prefer your hair when it’s a bit looser than your norm, or if you don’t like your hair to curl at the roots, air drying for a while and then diffusing may help achieve the look you’re going for. I saw someone recently asking for how to achieve more of a jason momoa look, and I think air drying about half way and then diffusing may be a way to try to achieve that.

If your goal is instead to maximize volume, and/or keep your waves tighter, then diffusing first will help do that. I think of diffusing as helping to ‘lock in’ the shape my hair has when wet. So diffusing first helps start to lock in the curls before they have a chance to get weighed down as much.

In other words, if your goal is to achieve the looser end of your curl pattern spectrum, air dry entirely or air dry and then diffuse. If your goal is to get results that are in the middle of the tightness your hair can achieve, diffusing part way and then air drying is the way to go. If you want to maximize your curl tightness then diffusing until 90 or 90% dry will help.

Why Does Diffusing Make My Hair Frizzy?

If diffusing is making your hair really frizzy, I’d first look at your diffusing technique. Are you moving or wiggling the diffuser a lot as you go? Are you constantly moving it from one place to another on your head? The more you move the diffuser around while diffusing, the more likely you are to introduce frizz.

The next thing I’d wonder is if you are diffusing until your hair is bone-dry. Many people find that if they diffuse to 95% dry and then let it finish air drying, that results in a lot less frizz.

If your hair is only somewhat frizzy, this may just be the result of diffusing. It is normal for diffusing to introduce a little bit more frizz than air drying just because it is basically wind blowing on your hair. Using a lower speed may reduce the frizz level.

Why Does Diffusing Make My Hair A Mess In The Back?

If you find that diffusing your hair makes your hair messy in the back, you’re likely leaning over rather than staying truly upside down while you diffuse. If you lean over, your hair will pull to the sides of your face ad sort of part down the center in back, and get stuck that way if it dries in that position.

I have a blog post about how to avoid a mess in the back of your hair when styling hair upside down.

You may also find that only diffusing upside down for a short period of time works better for you. 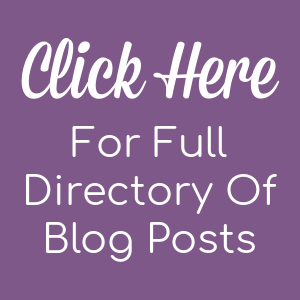