I’ve read Curly Girl: The Handbook by Lorraine Massey. This is the book that the true curly girl method is based on. I read the book after over 2 years of following “curly girl method” related YouTube channels, forums and groups.

I’ve spent a ton of time in wavy/curly hair platforms online. So…I was really surprised that what the internet calls ‘the curly girl method’ is one thing, and the true curly girl method from the book is something different.

This is particularly relevant to me with this blog, too. I know that most people online have a concept of what the curly girl method is, and use that term when searching for content. So in a sense, it would make sense for me to use the term, too, to help them find me.

Yet…that’s a little strange to do if what I am referring to doesn’t match the real curly girl method. I feel weird about my use of ‘curly girl method’ and thought doing a blog post explaining the different ways “CGM” is used, and what I mean when I use it, will help clear things up. 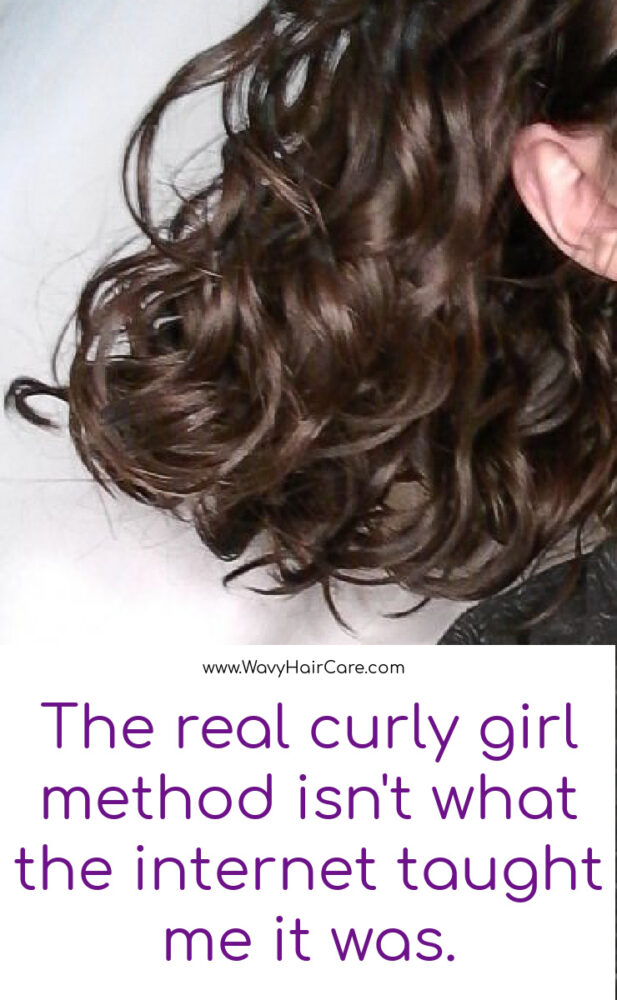 What is the curly girl method?

The curly girl method is a method of haircare based on Lorainne Massey’s book Curly Girl: The Handbook. It advocates for using botanical-based products and avoiding ingredients it considers harsh. It says to never use sulfates, silicones, drying alcohols, brushes, combs or heat tools.

If you’re interested in the book, you can get it for about $6 shipped on ThriftBooks. If you sign up through my link they’ll give you a 15% discount on your first purchase! I’ll get some rewards points as well, just to be transparent!

The real curly girl method puts a big emphasis on plant-based ingredients. I have heard there are slight differences in different versions of the book, I read the version that had a copyright date of 2010, for your reference.

Massey repeatedly references using “botanical conditioners” in the book. It does mention avoiding sulfates, silicones and drying alcohols, but advocating for using botanical-based ingredients is referenced constantly. It says to look for conditioners that have high concentration of plant-based ingredients like mint, lemongrass or rosemary.

It also says to make sure they’re listed in the top half of the ingredients list to ensure that it’s not a negligible amount. In my 2+ years in curly groups online, I had never heard people reference botanical ingredients or those 3 ingredients at all.

The portion of the book about store-bought products is tiny!

The chapter on products (Chapter 8) is 13 pages long (counting each side of a sheet of paper as 1 page). Only two of those pages what you should look for, and what you should avoid, in store-bought products. The rest of the chapter, is referencing homemade hair recipes.

The recipes listed in this chapter call for using food ingredients like powdered egg, pasta water, brown sugar, and avocado to make hair masks. In multiple places in the book, it references making a spray with just water and lavender essential oil, and spritzing your hair to refresh it and combat any odors during washes.

This focus on homemade and natural products is probably what surprised me most about the book.

What techniques and routine guidelines really come from the book

The handbook talks about how traditional towels can cause frizz, and suggests using a smoother material to dry your hair. It specifically mentions t-shirts, paper towels or microfiber t-shirts instead. The book references using these fabrics and “Scrunch-squeezing” your hair.

Online this is known as microplopping. It shares root-clipping techniques. It doesn’t talk about wrapping your hair in a t-shirt (what we call plopping online).

It advocates for using gel.

It speaks out against chemical relaxing, blow-drying (it always says “blow-frying” in place of blow drying), curling irons, but says some gentle dyeing can be okay. It does differentiate between “blow frying” and diffusing, even recommending diffusing for people with wavy or s’wavy hair. It does say to use low to medium.

It is very strongly against using heat outside of diffusing, though. There are some Q and A sections throughout the book and there are two that reference if using heat occasionally is okay. In both cases it says no, it is not okay to blow dry even on rare occasion.

It says to avoid gels that have parabens and phthalates. I don’t see this discussed often online.

There are no scientific sources cited in the Curly Girl: The Handbook book. It does list sources for photos, but none for backing up claims like “sulfates are harsh”, or for showing evidence of why botanical ingredients are healthier for curly hair.

How The Label “curly girl method” Is Used Online

Though it sometimes also gets more detailed and includes:

Some of this aligns with aspects of the book. Yet, it leaves out parts of the book that felt highly emphasized, too – like botanical ingredients. It also seems to add some things (like plopping) that don’t actually come from the curly girl method book. Also, the book doesn’t discuss water-soluble vs non-water soluble silicones. It just says to avoid silicones altogether.

“Curly girl method” is a bit like “kleenex” and “q-tips”

How often do we buy generic cotton-swabs and still call it a q-tip? Or any brand of tissues yet call it a “kleenex”? It’s very common to do with these products and many others as well. I feel like this phenomenon has happened with the “curly girl method” in a sense.

I personally feel that “curly girl method” is primarily used online as a way of saying something like “I try to use gentle products”. Due to learning about the “curly girl method” online for 2 years before reading the book, I thought that “natural curly hair care” referenced your natural pattern.

I thought it was a way of saying “I’m embracing my natural texture, not trying to change it” or something like that. After reading the book, I realize it’s a natural method but that ‘nature’ isn’t referencing your natural hair texture, it’s referencing trying to use plant-based products. I think that part of the real curly girl method has completely been left behind by most people.

I have even occasionally seen people say they are doing the curly girl method except they use sulfates, or they use silicones. I believe what these people mean is that they are simply working to embrace their natural hair texture rather than curling it, perming it, or straightening it.

Embracing your natural hair texture isn’t really the same thing as the curly girl method, though. Yet somehow, “curly girl method” seems to have morphed into sometimes being used to reference almost any form of natural textured haircare. 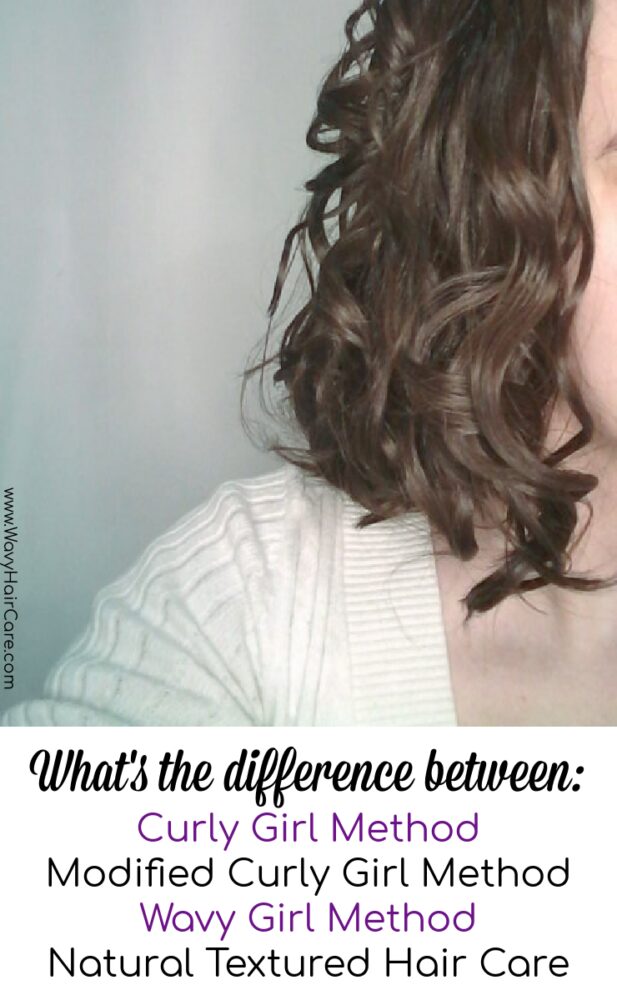 What is modified curly girl method?

After reading Curly Girl: The Handbook and learning what the true curly girl method is…I’d say nearly everyone is actually doing a modified version of the curly girl method. I don’t think I follow anyone online who holds themselves to using products that are primarily plant-based as I haven’t seen that discussed at all.

What is the wavy girl method?

According to Kristine Marie Contreras, owner of the Facebook group Wavy Girl Method (official) – Wavy Hair Don’t Care the wavy girl method was coined by her. Wavy girl method isn’t a rigid method. Instead, it’s the belief that wavy hair often does better when breaking some curly girl method rules.

The wavy girl method encourages people with wavy hair to adapt the curly girl method based on whatever works better for them individually.

So, more than telling wavy-haired people what to do, it gives them the freedom to do whatever works for them. As a result, routines can vary really dramatically. However, it seems to me that most often, people who say they do wavy girl method are following some aspects of the curly girl method, while breaking some curly girl method rules.

Just as one example, someone who is doing their own wavy girl method might avoid most silicones, but use some water-soluble ones, and they might use sulfates twice a month to clarify. This is just one potential example of what could be called the wavy girl method, though.

What Is Natural Textured Hair Care?

It can feel slightly dishonest to use “curly girl method” in my blog posts or titles when I am not following the book very closely.

However, I know that most people online who are searching for content about the girly curl method don’t care about botanical ingredients. What they care about is embracing their natural textured hair while avoiding sulfates and silicones that are not water-soluble. And that, I do (mostly) follow.

Just to be clear – when I use “curly girl method” on this blog I will primarily be referencing methods of haircare that involve avoiding sulfates (except when clarifying), and avoiding non-water-soluable silicones, and drying alcohols. That is the most common understanding of what the curly girl method is.

I hope people are able to understand why I am choosing to do this. It’s not to claim to follow a method that I don’t follow, but just to use the terminology the way that it is most commonly understood.

If you want to learn more about the “curly girl method” or naturally textured hair care – check out my wavy hair blog post directory. It’s a page that lists links to all of my blog posts, by title.